Dinosaur of the Ocean 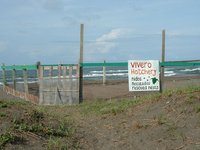 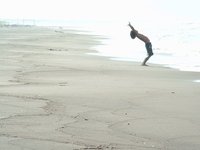 After a brief stay in Lima, I flew to Costa Rica for a week of volunteering at the beach of Parismina island. The two shifts of volunteers have to patrol 4 hours each every night mainly to protect sea turtle eggs from being stolen by poachers and sold in black markets. 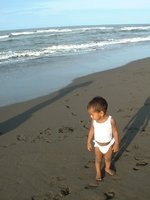 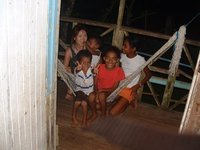 Barlomina, my host mother, lives in a wooden shack with two bedrooms. I stayed in one and the rest of the family stayed in the other. I immediately befriended the younger members of the family, as I always do. Everytime I attempted to read on the porch, they would surround me with the cutest laughter and playfulness so innocent that make me stop my reading and join in for the fun. 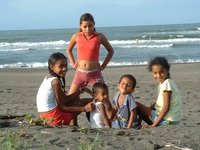 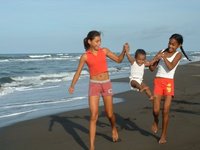 Patrolling on the beach at night is not as romantic as I thought in the beginning. First of all, the pace was quite physically demanding. Secondly, we walked in complete darkness to avoid alarming the mother sea turtles which attempt to come on the beach to lay their eggs.

Sea turtles go back to dinosaur period. There are about 10 species of sea turtles in the world. The most representative, namely the Leatherback Turtle, chose to lay egg on the beach of Parismina island every year from March to June while green turtle from July to September. Research had shown that sea turtles usually return to their birthplace to lay eggs. However, no one has yet to figure out how and why. The rate of sea turtles have been decreasing at a rate of 20% per year. This alarming factor is mostly due to improper or illegal fishing method still practice by many which kill thousands of sea turtles, sea lion, dolphins and whales each year.

To watch any birth process is enough to make anyone realize how precious life is. To observe this process of the oldest reptile in the oecan is to literally see tens of thousands of years of history condensing into a miracle. To witness eggs coming out from the tail of a six-feet long mother sea turtle in the moonlight, listening to its breathing and the sound of the waves is really a one-in-a-lifetime opportunity. 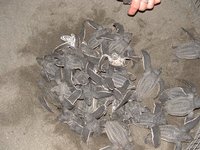 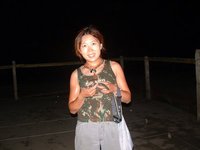 The most satisfying moment came as we witnessed over 100 baby turtles climbing out of their nest in the sand and stumbling onto each other. They have been hatching under the sand for two months. (Temperature determines the sex of these turtles.) Knowing that only 1 out of 1000 baby turtles survive to adulthood, which takes over 30 years, I cannot help myself but to wish these little fellows good luck when they crawl towards the roaring ocean with their tiny arms and legs.