A city with no character

I don't mean to offend anyone who is fond of this semi-modern Latin America city. It is still a bit hard to justify my decision of a 35-hour of roundtrip bus ride from San Jose to Panama City. The city itself is certainly not as colorful and characteristic as many colonial towns that I visited in South America. 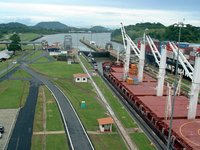 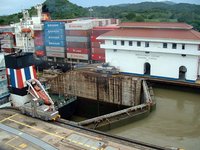 As impressive as it is, the Panama Canal, the only waterway connecting the Pacific and Carribean Ocean, was built in the early 1900s and put into use around 1914. It is no doubt one of the most successful engineering achievement in the last century. Immigrants all over the world participated in the construction and resulted in the diversity of population nowadays. There are three set of locks to rise and lower different sizes of cruise and cargo ships. I visited Miraflores Lock, which is closest to downtown and saw the operation as a few cruise ships pass through. It only takes about 30 minute to go thru the two lowering gates at the Miraflores Lock for the gigantic cargo ship from Asia. According to the guide, the Panama canal makes about $1 million profit per day for this country.

If this is true, how can one explains such a big part of the city consists of ghetto/public housing, and other parts resemble Las Vegas in the 70s or Florida's tourist district? Which swiss bank accounts do these money really go at the end of the day? I walked aimlessly after getting off at 'cinco de mayo' plaza and wondered...

Why, when it rains, do all the windows in the local buses have to be closed to a point where the only reason suffocation doesn't happen is because the driver has to open the door once in a while to let people in? (And you still get wet from the water dripping from the roof of the bus) Why do local bus drivers blast reggaeton on their buses and cut lanes on the highways like they are driving tiny japanese race cars only with consist stream of black smoke coming out of the 10-feet high aluminium exhaust pipe? I struggled and struggled hard to find some kind of identity that defines Panama city, beside the famous canal.

Chances are if I stay longer, I may grow to like this city.

gotta dissagree. I was there 4 days on the way to Medellin Jan. 06 and I liked it. I agree pollution and some things are bad, it seems that to be a memeber of the bus or truck club your vehicle has to belch enough smoke to kill all the people on the corner as you drive by. I like the upscale restaraunts with lowscale prices. Mostly they are outdoor in quiet tropical clean surroundings right in the middle of town but far enough from the main street that noise and pollution is no problem. Donkeydust