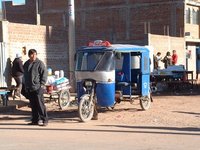 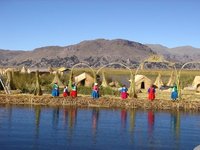 A short boat ride from Puno in Lake Titicaca, I arrived at Uro, the floating islands created by the descendants of Armaya which has more than thousands of years of history. These floating islands are primarily made of Totora Reed which look like a giant green onion (about an centimeter in diameter and actually eatable) which grow abundantly on the lake. Nowaday, the islanders have modern necessity, thanks to solar energy. Their way of life, however, is still quite interesting. For example, an effective way to resolve issues on these islands is to simply separate the islands if the families have an argument.

Another three hour boat ride took me to the island of Amantani, slightly smaller than Isle de Sol from the Bolivian side with some friendly local families. Me and another British couple was assigned by the local village chief (indicated by special costumes) to stay at Victoria´s two-story house. Victoria, in her late 20s or early 30s, has four children. Her two sons are named Washington and Clinton.

The absence of any kitchen appliances did not hinder Victoria to make the most famous pervian qinua soup and the strangest-looking local potatoes. In fact, all ingredients are fresh from their farm including fresh coca leaves for our teas. 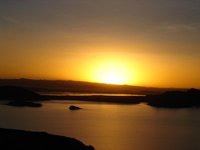 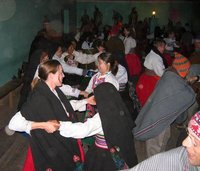 After a satisfying lunch, we hiked up one of the two hills on the islands late afternoon to catch sunset which, I must say, better than the one on Isle de Sol. Miraculously, temperature dropped drastically once the sun disappeared and the alpaca hats that were neatly laid out on the sidewalk by the local women seemed very appropriate all of a sudden. I could not resist the temptation and hurried down the hill before darkness arrived as there is no electricity on the island.

At dinner time, I gave each of Victoria's children a color pencil, one that have multiple colors at the pencil tips. No word can describe the priceless look on their little faces. Their reaction to such a simple gift make me realize how western kids are spoiled rotten nowaday.

To make a complete fool out of the tourists, 'disco' was arranged by the locals for us. Victoria came into our room shortly after dinner with at least 10kg of local costumes and threw them around me and my British friends - a guranteed instant weight gain.
We laughed our half gringo and half traditional look as we walked cumsily to the salon.

With a local band playing at the stage, the next hour was more like an areobic class for us than anything else. The local dance was so repetitive and physical demanding that most of us tourists could hardly catch our breath after each song. Needless to say, we slept extremely well that night.

Early next morning, after 15 minute of emotional farewell to the children, we were finally able to walk out of Victoria's house and went onboard for Tarquile island. A bit more touristy than Amantani island, Tarquile island actually have installed solar panels in many areas, without destroying its beautiful cascading farm lands and paved stone path meandoring through the village. In addition, locals here have very different costumes than Amantani island, indicating their social status. Tarquile men walk around the main plaza knitting with needles and partially-completed hats or belts in their hands. Even colors in their costumes and spices used in the qinua soup between people from these two islands are different. We concluded our island tour after lunch (steamed or grilled kingfish from the morning catch) and a 500-step downhill walk to the pier.