Colonialism and the Devil's Mine

'Have you encountered any anti-colonialism attitude when you are traveling in South America?' I asked my fellow Spanish groupmate during the mine tour in Potosi, Peru. 'Not particularly.' he said, 'It was generations ago. At least we didn't kill all the indians or indengious people like what the other Europeans did in Northern America and other parts of the world.'

It is true that when the Spanish conquistadors came to South America in 1532, they did not carry a killing spree. However, the reason behind this is not necessary a humane one either. The vast mineral resources in this part of the world is valuable enough to make the conquered race, in this case, the indengious people, to work in extremely poor conditions in the mines. I visited one of them called the Rosario mines in Potosi, the highest city in the world (over 15000 ft.) 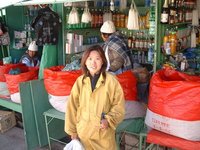 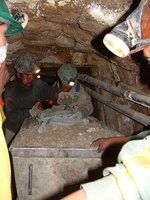 With over 8000 men currently still working at Rosario, and an unknown number of children, the condition remained unchanged. 'Tio', the underworld god, still worshipped by all the miners once they entered this dark and suffocating world, although they are mostly Catholics. 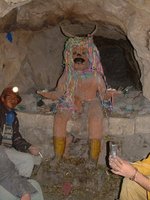 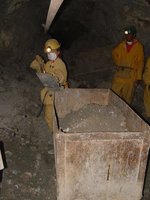 Before entering the mines, we stopped by the local market to purchase dynamites and coca leaves which I had some myself to elevate the lack of oxygen effect. We first visited a processing factory with some miners resting outside and greeting us with their cheeks filled with coca leaves. The sign at the entrance says 'Prohibido Ingresco Barracho al Trabajo' (Do not enter workplace drunk).

Afterward, we drove uphill. Since all explosions are done after 6pm, our guide put a small bomb together with explosives from the market, positioned it about 100m away, then lit and ran off. The sound was quite deafening and some of us were really excited by the ease of getting explosives and actually trying it out.

Finally, we entered the mines with our gears and gifts with a tremendous curiosity which soon turned into nothing but respect for all the miners (whom we call 'maestros') who spend the entire day digging and transportating rocks underground in suffocating condition without any protective gears. Naturally, we had to pay our due to a 'bisexual' statue called 'Tio', hoping that he/she could give his/her blessing to the miners.

Although we did not encounter any child miner during this tour, our tour guide used to be one. Thanks to contributions by foreign organizations such as the ones mentioned above, he had the chance to learn English and now, at 21, making a living with tourism. I only hope that this trend will continue for their future generations. Many children was forced to work as early as age 10 when their fathers pass away (usually around 35-50) to support their families fully aware of the fact that the dust is extremely detrimental to their health.

Another heartbreaking experience witnessing the working and living condition of the unprivileged, in this case, most indigenous people in this once rich city and considered to be 'the town that made Europe rich' - Potosi.

Afterthought: Who are we to complain about our working condition? Or anything at all?