A Visit to Outerspace

From La Paz, a 10-hr bus ride on the unpaved Bolivian 'highway' took me to Uyuni, a southern highland town famous for its surreal landscape namely the Salt Flats and its surrounding lagunas. 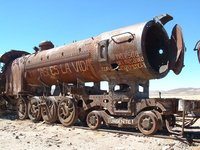 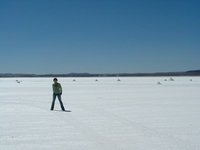 True to the claims, I felt more like an astronaut than a tourist in this journey into the 'unknown' during this three-day Jeep ride (if only my behind stop complaining about the grand massage it had to endure in the Toyota Landcruise.) I truly believe that Uyuni is the final resting place for all the rejected Toyota 4x4 from the western world. And nowhere else but southern Bolivia would a 'retired' 4x4 vehicle can be more appropriately used. 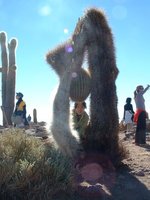 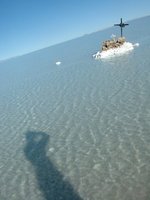 Our young driver, Miguel, first took us to the train cemetery right outside town. These rusty 'corpse' was from some British train abandoned in this highland dessert decades ago. Afterwards, we visited the Chachina, where salt is actually extracted by workers, and the famous 'Salt Hotel' which is built entirely out of salt except the roof and is actually functional. Because of the limited space and resulted higher price, most tour operators choose not to provide this options to their customers. 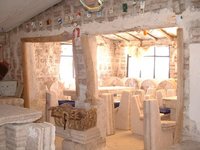 We moved on from the 'Salt Hotel' to the first outerspace sighting - the 'Fish Island'(Isla de Pescado) in the middle of the Salt Flats. We had a simple lunch next to hundreds of giant cactus on this island which has the shape of a fish. Imagination exploded after lunch when groups of young tourists tried to strike the most original poses for photos on the Salt Flat, with literally a line separating the cloudless sky and the snow white salt. We kept driving to part of this area with thin layer of water, allowing a perfect reflection of the sky. Yet among the beauty of this area, a tragic story was behind it, explaining the simple grave stood in the middle. A local Bolivian family was stranded and died right here at one time because of the extreme and unforgiving winter weather.

Scenery changed after leaving the Salt Flat. We drove up and down and around mountains of rocks next to volcanoes. Our jeep got bumpier with the increase ruggedness of the landscape and finally stopped in front of a motel-like settlement in a remote village called San Juan, the 'Neocropolis', according to the sign next to it. If this doesn't make me feel like Mars, then probably nothing would come close to it. 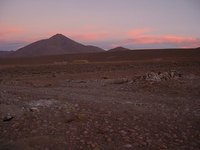 Our room has six twin-sized beds lined up long one wall and one next to the door, and so I appropriately named it the 'seven dwarf dorm', only Snow White would not withstand the poor condition. Our group, however, consisted of two young British couples, one South African and an Indian-American, had great conversations over dinner and braved the night with our true backpacking spirit. I sneaked out after dinner to look for outerspace species in the sky but all I managed to find is the 'Southern Cross' before the cold conquered my curiosity. 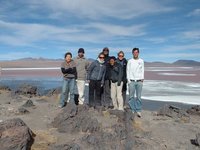 On the second day, we visited a few magnificent lagunas(lakes) with different characteristics. Laguna Colorado - famous for its red or rusty color, because of the algaes and plunkons in the water. And Laguna Verde - with its aqua color. Both attract different species of flamingoes all year long. I don't think Van Gogh can even come close to the perfect blending of colors that nature here create.

The condition of our 'dormitory' on the second night was even worse than the first night. With temperature dropping to below 0 C at over 4000m altitude, none of us had a decent sleep, fighting for the last bit of oxygen in the closed room while shivering in our sleeping bags on the concaved box-springed beds and one-inch thick pillows. Even the bad Bolivian wine does not help. The worse had yet to come. 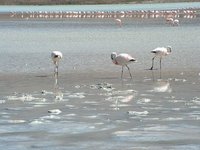 Getting up at 5 am in the morning with -10C outside with an absolutely disgusting shared bathroom is more than torturing. My nose was running like River Nile even with a million layers of clothes on from head to toe. We finally crawled into our Jeep with Miguel laughing at our spoiled tourist behavior. Obviously he is the only one that found frozen tourists in his jeep funny and drove in complete darkness to the geysers. None of us even attempted to move our facial muscle.

The geysers and the moon-like landscape, although more than impressive, did not wake us up. We were longing for the hot springs that came afterward. The brave souls bared off with nothing but their swimming suits in the subzero wind chill and jumped into the natural the springs. I managed to bare half and soak my feets to recirculate my blood stream before breakfast. What a heavenly feeling!

I said farewell to my group after seeing heaven and experiencing hell with them in the last few days. Miguel dropped me off close to the border between Bolivia and Chile with others awaiting. I would be taken across the border to a small Chilean border town called San Pedro de Atacama.

Check back for some amazing photos in a few days!!!!!